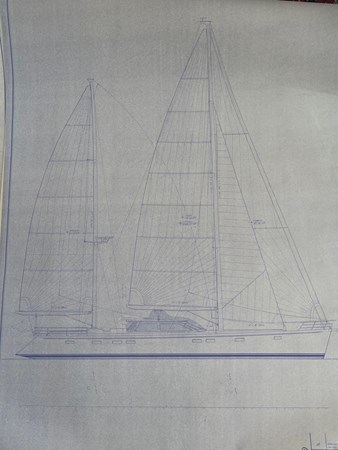 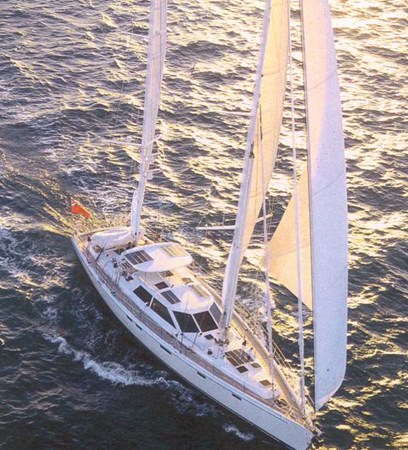 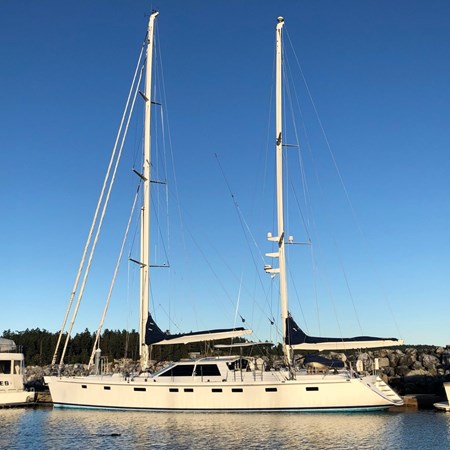 LEONORE has a very versatile layout with a great pilothouse and engine room for ease of use and management at anchor or at sea.

In her almost 100,000 miles at sea under her first owner, LEONORE used her generator VERY LITTLE as she has gigantic alternators and very large banks of batteries.  Please note that the batteries have all been replaced (7/2018) under her new ownership, allowing for many years of trouble free supply of direct current on board.

LEONORE has a great master cabin the full width of the boat aft with a totally separate access to deck.  In addition, she has two cabins forward with separate heads and a very large shared shower.  The port cabin has upper and lower bunks and the starboard cabin has a double bed.

In addition, the fourth cabin, with its own head and shower that doubles as a powder room, converts from the aft port salon seating area and treadmill, to a cabin with privacy enclosure.  This proved, in LEONORE's many miles, as a valuable "overflow" cabin and, more importantly, an easy access for someone who was to back up the "on watch" person.

Engine controls in pilothouse and pedestal

Note:  There is no standing rigging in common between the main mast and the mizzen.  They are totally separate.

Furler on storm jib/staysail is manual

Winches by Harken - Self tailing

Seahawke Rigging carried out an 8 year rod rigging refit with BSI components.  The 8 year service consisted of the following work done in November 2015.

- The headstay and inner forestay rods were replaced with new.  The cutter stay (middle stay) and the backstays were reheaded and had a short section added at top to make up for loss of length during the reheading process.  All eye fittings, sockets, rod connectors and toggles were replaced with new.  The backstay SSB isolators were also replaced.

- Some lateral rigging was replaced with new, some reheaded.  Please refer to the BSI spreadsheet as this cannot be summarized.  The spreader tip-cups and diagonal tang assemblies were all sent to BSI, Denmark to be inspected, undergo non-destructive testing, cleaned and polished.  All turnbuckles were replaced with BSI type SL5.

- All rods on the mizzen were replaced with new with the exception of the D1 aft which was reheaded.  Please refer to the BSI spreadship for full breakdown.  As with the main mast, the spreader tip-cups and diagonal tang assemblies were all sent to BSI to be inspected, undergo non-destructive testing, cleaned and polished.  All turnbuckles were replaced with BSI type SL5 except D1 forward and D1 aft which were inspected, NDT, cleaned and polished.

- Spreaders for both masts were painted.

- All spreader lights and navigational lights were replaced.

- Both Navtec vangs were resealed and recharged.

- The MaxPower bow thruster received new hydraulic hoses for the turbine and the raising/lowering cylinder, as well as a new gas shock.

All navigation and communication equipment new as of 3/2017

Navico (00011548-001) B&G.  The H5000 Hydra CPU is the brains behind the ultimate cruiser/racer system.  Its ultra-fast ARM processors deliver data in an instant and the browser-based setup allows straight forward and flexible configuration.  Unique sailing features ensure the H5000 remains ahead of the fleet.

Navico (000-11554-001) B&G H5000 pilot computer.  The record-breaking B&G pilot features dedicated steering modes and sailing algorithms including gust response, recovery and high wind response.  It has been proven in the toughest conditions and most testing enrironments and is ideal for short-handed cruiser or racers.

Note:  An H5000 Hydra, Hercules or Performance CPU is required to steer wind.

Built-in treadmill in salon with TV in closet

Hot and cold shower in transom

Hatches have integral black out sliders and screens, all built in.

The original owner of LEONORE was an extremely experienced yachtsman having owned multiple sailing yachts before LEONORE.  When LEONORE was built, he lived in New Zealand the entire time during her design and construction.  When completed, without compromise, the owner sailed aboard for just under 100,000 nautical miles.  This took him all over the world, from high latitudes both north and south, all over the Pacific, around Cape Horn and throughout the Atlantic and Mediterranean.

The current owner has concentrated on the Pacific Northwest.  After hundreds of thousands of dollars in capital upgrades, the owner is moving on to a new land based adventure..

LEONORE is a very well proven design and ideal layout for her next adventures, near or far.  In yachts of even 20-30 feet longer, NO YACHT HAS A WALK-IN, STAND UP ENGINE ROOM to facilitate easy access to ALL equipment LIKE LEONORE .  This enables important maintenance to machinery and systems to ensure reliable service.