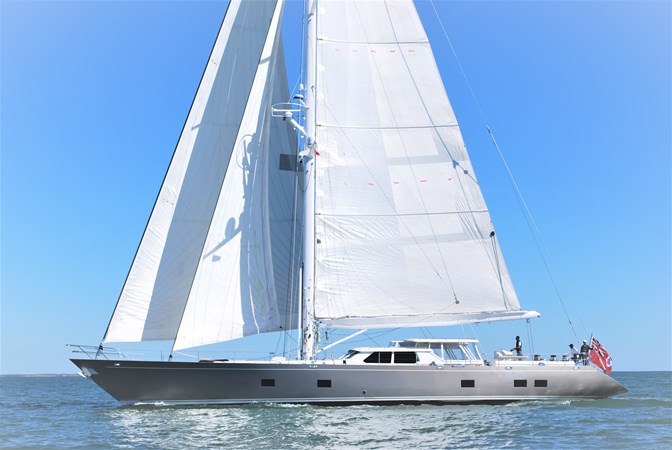 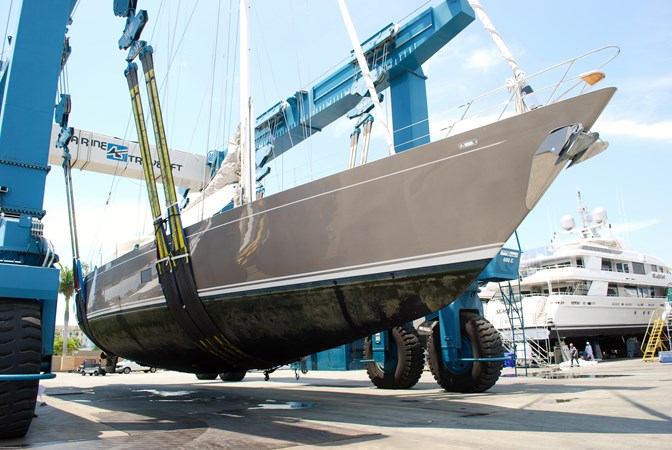 For six or seven guests in three stateroom aft, all with en suite marble baths.  The master is full width aft with full Jacuzzi bath/shower and marble vanity with his and her sinks.  Separate toilet and bidet aft.  The two guest cabins midship feature one double bed cabin to starboard and a twin bed cabin to port with a third Pullman bunk.  Both guest cabins feature walk in, enclosed marble showers.  The port cabin has a separate access for use as a powder room.

Coordinated and designed by Andrew Winch, both the layout and interior have been designed and decorated with ease of use and luxury as primary requisites.  The general interior is based upon utilization of wood finishes employing solid woods of teak, cherry and various burls.  Additional materials include marble, Corian, aromatic cedar, mirrors and stainless steel.  Overhead is Ultra Suede - Easy Leather.

Intermediate shafts are 30 pounds each of carbon fiber.  These replace 180 pound each shaft

Clean fresh air vent in port cabin for circulation around the vessel, 2022

Serviced both watermakers - replaced end fittings and flushed with chemicals, 2021

Both proximity sensors for retracting and lifting bow thruster replaced 2021

All five fuel tanks onboard cleaned, 2021

Emergency tiller onboard and operational

Twin starboard and port cockpit mechanical cable steering.  Additional hydraulic quadrant powered by double redundant hydraulic motors.  Autopilot control in the exterior consoles, in the cockpit, and in the pilothouse.

Visual inspection of props and added grease to nipples, 2021

Adjusted AVR on both generators (2021)

(4) battery banks for main engines and generates with paralleling capability

All battery banks are charged by 3 x 100 amps battery chargers plus the four inverters.

Other - All navigation systems can be displayed on deck (4 screens), at the chart table (2 screens) and on the TV screens in the master cabin, salon, crew mess and captain's cabin

Re-gas all gas stays for deck lockers and hatches

Drop down, clean and repaint/service both anchor chains, 2021

Fire extinguishers - (12) located in each cabin, galley, salon, on deck, and laundry room

All powered by hydraulics

(5) Multisystem Samsung - New as of 2016 with DVD including a Blue-Ray by Samsung in master.

Additional laundry - Iron and ironing board

Tender has towbar around engine for wake board and towing

VAGABOND (as MINISKIRT) went through a very extensive, two year refit including a redesign in all areas of her deck layout, completed in 2011.  Her new transom boasts a fold down swim platform/boarding platform.  The only way to accomplish the extensive modifications to her cockpit was to cut the deck off and start over.  Now, her hardtop protects the recessed seating while still providing great views.  The two new steering stations each provide excellent visibility both windward and leeward and full access to all necessary instrumentation as well as great accessibility to necessary winches.

Electrically, the boat was rewired as necessary, all new electrical panels were built and the new Atlas frequency installed.  Four new inverter/chargers were installed for a total of 14 Kw of inverter capacity.

All of the interior was completely refinished and new overheads were built.  All new appliances were installed as well as new audio/video equipment with a dedicated computer just for music and movies.

All batteries replaced in laundry room and engine room

Totally new wet exhaust system made out of Inconel

Mast removed from boat, refinished and strengthened as necessary, repainted and put back in boat

Once this work was completed, the boat went to Thunderbolt Marine for bottom work.  She left Thunderbolt about a year later because of the extensive work.

Work at Thunderbolt in 2018

All standing rigging sent away, re-headed or replaced

Apple TV in salon and staterooms

New firehoses and inspection of all safety equipment

Prop speed on props and shafts

Professionally cleaned all ducting on board

Replaced both hot water boilers on board

Mast and boom removed and serviced

Replaced as necessary all rod rigging and running rigging

Replaced and strengthened monolithic grids for engine exhaust on both sides

Replaced all anodes on hull

As a fiberglass yacht, with twin engines and bow thruster, and an incredibly shoal draft of just 7'/2.2m, VAGABOND is not just redundant, but also a yacht that can access areas no other sailing yacht can even approach.